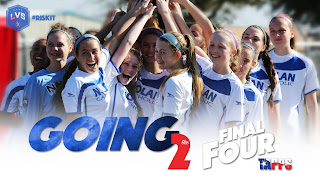 The Nolan Catholic Women's Soccer Program captures their 28th TAPPS Regional Championship today with their 3-0 shutout over Incarnate Word San Antonio.  With that said, the Lady Vikings qualify for the TAPPS State Final Four more times than any team in the history of TAPPS.

Hannah Allred and Kate Kleiser combined for the 3 goals today and sophomore, goalkeeper Sarah Becan gets her 9th shutout on the year.  The Lady Vikings improve to 20-10-2 and move one step closer to capturing their 5th TAPPS State Title.

With a 1-0 halftime lead, the Lady Vikings continued to add waves of attack outshooting the Incarnate Word side 16-3 on the day doubling the lead in the 54th minute as Allred scored her second goal of the match.

Later in the second half of play, Klesier pushed forward and got tripped up on her way to goal and was awarded a penalty shot which she proceeded to make good on for her 7th goal of the season.

LVS head coach, Jay Fitzgerald commented, "Another solid effort from our group; we just don't stop, we have done a nice job with our patience yet again and every single kid on this team is contributing."

This team is as balanced a team as they come.  Sixteen out of the 19 players on the roster have played in close to 30 games this season and with 20 wins on the season they look for just 2 more.

The TAPPS State Final Four starts next Wednesday against Bishop Lynch.  Both State games will be played at John Paul II High School.  Ursuline and TCA will play at 5:00pm and Nolan and Lynch will follow at 7:00pm.  The championship match will be played on Saturday, Feb. 27th at  the Wheatley Heights Sports Complex in San Antonio at 6:00pm.


Posted by . at 10:21 PM
Email ThisBlogThis!Share to TwitterShare to FacebookShare to Pinterest