The Nolan Catholic Women's Soccer Program is excited for the holidays but even more excited for the 12th Annual Nolan Soccer Alumni Day.  This event comes a week earlier this year as UIL pushed the start day of the season this year to Jan. 5th so our fearless LVS Alumni have one less week to dust off their cleats and prepare for this years game. 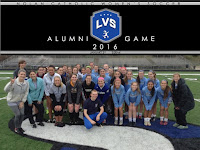 Come on out and compete against your #33 National ranked Lady Vikings and show us that you haven't missed a beat.  Whether you are currently playing or haven't played since your LVS days we would love to see everyone.

Be there...Saturday, December 31st at 1:00pm at the beautifully updated, Doskocil Stadium.  See our brand new field, our brand new press box, and our brand new video board to watch your skills and spills on display.  Free food and fun.  The LVS Alumni Soccer Day is in its 12th year so come out and work off that Christmas turkey and stuffing before ringing in the New Year.

Our Lady Vikings have been hard at work gaining local and national respect.  With an overall record of 4-1-0, the Lady Vikings will kick off the year with a friendly against the #1 team in the land, Flower Mound Marcus on January 2nd before hosting the nations top soccer showcase, the National Elite Prep Showcase January 5-7.  The Lady Vikings will take on UIL 4A State Champion, Vandergrift from 2 years ago and 2 teams from California, one being another Top 10 team in Liberty from Brentwood, CA and Grace Brethren from Simi Valley, CA.

The Lady Vikings Soccer program takes great pride in playing one of the most competitive schedules in the country.  This mentality is fueled by the competitive spirit in the programs current and former players.  There is a No Fear factor and LVSers are always up for a challenge.

We look forward to seeing all our former LVSers.  We will look to broadcast some of the match on Periscope vis Twitter @nolansoccer and we forewarn you of the raw content and some of the footage that may be on display.  Can't wait to see our #lvsFamily.


Posted by . at 11:01 PM No comments:
Email ThisBlogThis!Share to TwitterShare to FacebookShare to Pinterest

The cold weather has arrived and LVS is in full swing.  The weather didn't effect either team tonight as the JV improved to 1-1 in district play with a 1-0 shutout tonight against TCA and the varsity kept the momentum going scoring 3 goals in each half for a 6-0 win over the Lady Trojans.

Freshman, Katherine Gilpin scored the first goal of her high school career scoring the lone goal of the night for her JV team.  She took a well played ball from Anna Keller in behind to score the first high school goal of her career.  With the JV under pressure for the first 15 minutes of the match, they started stringing together some passes giving them a nice rhythm, the games first goal, and they didn't take the foot off the pedal the rest of the game.  The result is the first win one the season with an overall record of 1-2-2 with 3 of those preseason games coming against varsity competition in the Liberty Varsity Tournament before Thanksgiving.

The varsity started strong sending a wave of players forward in the first 10 minutes off the match capitalizing in the 8th minute with Kate Kleiser threading a ball through to Hannah Allred for the 1-0 Lady Vikings lead.  Eight minutes later Allred strikes again off an assist from Katee Kimmey.

"This was a solid performance from our group tonight.  We attacked in waves with everyone making an impact on and off the ball.  We were very consistent tonight and our value of the ball was the best so far this year," said LVS head coach, Jay Fitzgerald.

Senior, Emily Keoughan scored the 3rd goals of the match in the 25th minute.  She was rewarded with her second goal in the second half, both assisted by Allred.

The Lady Vikings came out in the second half with a comfort about them taking them a while to attack with the efficiency they had in the first half.  It only took a 9 minute span for the Lady Vikings to add 3 more goals.  Allred, Keoughan, and Brennan Flynn scored in the 60', 62', and 69 minute.

The Lady Vikings take to the road on Thursday as they travel to Bishop Lynch with the JV kicking off at 6:00pm and the varsity to follow at 7:30pm.
Posted by . at 10:10 PM No comments:
Email ThisBlogThis!Share to TwitterShare to FacebookShare to Pinterest
Newer Posts Older Posts Home
Subscribe to: Posts (Atom)