The Lady Vikings Soccer tradition continues with our annual ALUMNI SOCCER DAY.  This Saturday, January 4th at 11:00am will kick-off the women's soccer Alumni Game.  The men's game will follow.

We always look forward to this game each year as this program was built on the strong traditions that our alumni left to the program.  The Lady Vikings Alumni along with the current players and coaches will head to Joe T Garcia's for dinner that night as well.

Posted by . at 10:51 AM No comments:
Email ThisBlogThis!Share to TwitterShare to FacebookShare to Pinterest 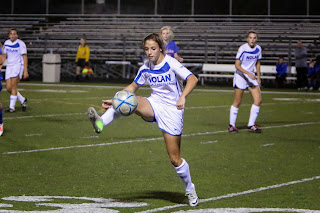 Posted by . at 9:24 AM No comments:
Email ThisBlogThis!Share to TwitterShare to FacebookShare to Pinterest

The women's soccer team will hit the road again tonight as they travel to Bishop Lynch as they continue district play. This match marks the final match of 2013. With finals next week, Christmas around the corner, and a couple holiday tournaments, the Lady Vikings will keep busy during the break. The Lady Vikings will return on January 2nd in preparation for their Alumni Game before their next district game on January 6th against Prestonwood.

Tonight's matches vs Lynch will kick off at 6:00pm with the JV and the varsity will follow at 7:30pm.
Posted by . at 7:43 AM No comments:
Email ThisBlogThis!Share to TwitterShare to FacebookShare to Pinterest

The Ursuline matches that were cancelled on Monday night are being rescheduled for Tuesday, February 18th. The location is to be determined at 6:00pm for JV and 7:30pm for Varsity.
Posted by . at 7:01 AM No comments:
Email ThisBlogThis!Share to TwitterShare to FacebookShare to Pinterest

State Football Tomorrow; Ursuline and Lynch Up Next

The Division I-5A State Championship football game between Nolan Catholic and Prestonwood Christian Academy will be played on Tuesday, Dec. 10, at 6 p.m. The game will be played in Corsicana at Tiger Field.

Tickets will be sold at the gates, but may also be purchased online through the TAPPS website at TAPPS.net. There will be a per ticket fee assessed on online purchases.

You can listen to the broadcast of Tuesday’s state title game against Prestonwood on your mobile phone or via the internet. Tune into @NCHSRadio online at http://tsrnsports.com/games/ or via the TSRN App (available in the App or Play store).

The Lady Vikings Soccer teams will be back in action as they hit the road against Ursuline at Jesuit High School on Wednesday night and Bishop Lynch at Bishop Lynch on Thursday night.  The game times are 6:00pm for the JV and 7:30pm for the varsity.
Posted by . at 5:06 PM No comments:
Email ThisBlogThis!Share to TwitterShare to FacebookShare to Pinterest

Varsity gets 8: Ursuline up next

The varsity continued district play tonight in their home opener against TCA and wasted no time.  With 6 goals in the first half and 2 in the second, the Lady Vikings cruised to an 8-0 result over the Lady Trojans, improving to 4-0-0 on the season and 2-0-0 in district play.

"Not a bad day at the office for us, missed a couple early and then got one and settled in," head coach, Jay Fitzgerald said.  He added, "we got too comfortable at times but we really proved that we can be tough to play against if we focus on the details."

TCA does not have a JV team, so that day off will help in preparation for Ursuline on Monday night.  The JV will play at 6:00pm and the varsity to follow at 7:30pm.  The match will be played at Jesuit in Dallas.

Training for both teams tomorrow at Gateway and in the computer lab on Friday.  There will be no JV match against All Saints this week and it will not be rescheduled.

#progress #westandforher
Posted by . at 10:43 PM No comments:
Email ThisBlogThis!Share to TwitterShare to FacebookShare to Pinterest

The Lady Vikings JV and Varsity teams combined for 8 goals Monday night as they opened the TAPPS 1-5A District season on the road at John Paul II.  Marissa Baldasti, Koryn Brookshire, Katie Ripple, Becca Traynor, and Kat Paul were the 5 different LVSers that scored goals in the JV's 5-0 win.

Head coach, Alex Mechalske, saw tons of positives in the win.  "A lot of players contributed and set the tone for the season", Mechalske commented.

The varsity followed the JV but had to come from behind early.

"We were in all the right spots, but early on we struggled to get a hold of the ball and we paid the price," head coach Jay Fitzgerald said.

After going down a goal in the 6th minute of play, the Lady Vikings scored 3 unanswered goals.  Elena "Lenny" Guerra got the scoring started in the 25th minute with a gritty effort getting on the other end of a Gwennie Puente cross.  "The goal was very important and the way we chipped away at them to get it, was impressive," Fitzgerald commented.

Puente got, what would be, the game-winner in the 2nd half after taking a pass from Emma Chandlee right up the middle and slotting it home for a 2-1 Lady Viking lead.  Puente wasn't done then as she was able to weave her way through the John Paul defense and slip a well timed ball through to Emily Keoughan for the 2 goal lead.

That is the way it stood for the Lady Vikings as they improve to 3-0-0 on the season and 1-0-0 in district.

Next up for the Lady Vikings is TCA at home tomorrow night at 7:00pm at Doskocil Stadium.  This match will just be a varsity match as TCA was not able to make a JV team.
Posted by . at 10:38 PM No comments:
Email ThisBlogThis!Share to TwitterShare to FacebookShare to Pinterest

LVS takes to the road on Monday night to take on the John Paul II Lady Cardinals.  The JV kick-off the evening at 5:30pm and the varsity follow at 7:00pm.
Posted by . at 7:27 PM No comments:
Email ThisBlogThis!Share to TwitterShare to FacebookShare to Pinterest
Newer Posts Older Posts Home
Subscribe to: Posts (Atom)