DISTRICT UP NEXT FOR LADY VIKINGS

The Lady Vikings feel good about where they are after 2 weeks of pre-season with the seasons first district game right around the corner. Everyone has contributed in their own special way, on and off the field. There is something about this group that feels different.

Lady Vikings Head Coach, Jay Fitzgerald commented, "I feel a different type of energy with this group of young ladies."

In the 2 scrimmages against the Nolan JV Boys and the inter-squad match, the chances that have been created are through individual flare and the interchange of small numbers around the ball, creating problems for opposing teams. Fitzgerald went on to say, " I don't even know where the attack is coming from; they seem to be on the same page."

The Lady Vikings go on the road on Monday night to welcome Liberty Christian to the district. This will be the first match for the Liberty Warriors since they moved up to 5A this season. That match will kick-off at 7:30pm. The JV will play before at 6:00pm.
Posted by . at 11:27 PM No comments:
Email ThisBlogThis!Share to TwitterShare to FacebookShare to Pinterest

The Lady Vikings took the field for their first scrimmage against the Nolan Catholic JV Boys. The boys took a 2-0 lead in the first half which held for the entire match.

"I was very encouraged in the way we managed the game," said LVS head coach Jay Fitzgerald, "we handled the pressure and passed the ball very well, establishing a pretty good rythme the entire match."

The JV boys were very athletic and had good speed up top. The back line for the Lady Vikings sustained that speed for the majority of the match.

Fitzgerald went on to say, "we made good decisions in the midfield and did a nice job winning the ball back and creating good chances getting into the front third of the field."

The Lady Vikings will play the JV Boys again during a Homecoming Week match-up on Wednesday night at 7:30pm.
Posted by . at 12:13 AM No comments:
Email ThisBlogThis!Share to TwitterShare to FacebookShare to Pinterest 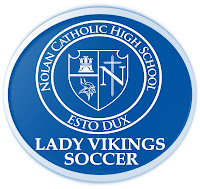 Week 1 in the books. The Lady Vikings are looking for another return to the State Championship to avenge a 3-2 loss to 20-time State Champion, Ursuline.

The outlook for 2010-2011 is extremely bright for Nolan Catholic. They return the majority of their offense and 8 of 11 starters from last year and only lose 6 of 23 letterwinners. It will be much of the same for this years team, but with a new sense of urgency, as they continue to have something to prove. "We had a fresh start last season but I think this year we know our identity and we are only a week into the season," said Nolan Catholic Women's Soccer head coach, Jay Fitzgerald.

The Lady Vikings are coming off one of the best seasons in history finishing with a 21-5-1 overall record and a National ranking as high as #15 by ESPN Rise.

Coming up this week, the Lady Vikings will play a couple inter-squad scrimmages, kicking off the season at Liberty Christian a week from Monday and then host Ursuline two days later, at Doskocil Stadium.
Posted by . at 11:24 AM No comments:
Email ThisBlogThis!Share to TwitterShare to FacebookShare to Pinterest

The 2nd Round of selections will be October 29th. The rosters can change throughout the year.
Posted by . at 11:18 PM No comments:
Email ThisBlogThis!Share to TwitterShare to FacebookShare to Pinterest

Try-outs are set for tonight from 7pm-9pm at Doskocil Stadium at Nolan Catholic. All athletes that are interested in playing soccer for the 2010-2011 season must attend try-outs tonight.

Friday, Oct. 22
Training 10:00am-12:00pm
Intersquad with JV Boys
*Varsity Only - wear white socks and white shorts
Posted by . at 7:51 AM No comments:
Email ThisBlogThis!Share to TwitterShare to FacebookShare to Pinterest

There will be no training this Thursday morning, October 14th.

The final off-season session will be Friday, October 15th from 3:30pm-4:30pm at the stadium.

Try-Outs will be Monday, October 18th at the Stadium from 7pm-9pm. Need all players that are interested in playing soccer this season to be present.
Posted by . at 8:13 AM No comments:
Email ThisBlogThis!Share to TwitterShare to FacebookShare to Pinterest
Newer Posts Older Posts Home
Subscribe to: Posts (Atom)