Related links:
Nolan Catholic Highlights/Recruiting
Posted by . at 11:19 AM No comments:
Email ThisBlogThis!Share to TwitterShare to FacebookShare to Pinterest

The Nolan Catholic Women’s Soccer Team is undefeated with a mark of 12-0 and have moved up in the National Rankings to #12 by ESPN. A total of 8 players have double digits in points which shows the depth this Lady Viking team has this year. Senior captains, Mallory Baum (9 goals/8 assists/26 points) and Morgan Ulliman (11 goals/4 assists/26 points) and junior Emily Grider (7 goals/6 assists/20 points) lead the Lady Vikings with at least 20 points in 12 games. The backline of Chelsea Heiman, Sam Henggeler, Emily Baker, and Kaytee O’Brien rounded out by goalkeeper, McKenzie Sauerwein have only given up 2 goals on the season.

The Lady Vikings need only 1 point to clinch the district championship and they have 2 district games left to play. Their schedule doesn’t get any easier through the brutal month of January. They start out by hosting one of the nation’s premier showcase events, the 2009 Red Bull Nolan Showcase taking on nationally ranked Southlake Carroll (#19) and McKinney Boyd (#47). Other nationally ranked teams the Lady Vikings will come across are #3 Marcus and #4 Plano West.

Complete List of National Rankings can be found for Week 2 by clicking on the following link: http://sports.espn.go.com/highschool/rise/soccer/news/story?id=3774977

For State by State High School Rankings click on the following link:
http://myespn.go.com/blogs/highschoolsoccer
Posted by . at 6:13 PM No comments:
Email ThisBlogThis!Share to TwitterShare to FacebookShare to Pinterest

The Nations #17 and #18 Team Battle on Wednesday Night 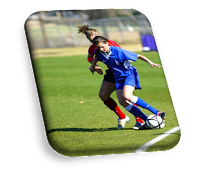 The #17 Lady Vikings Soccer Team moves to 11-0-0 as they notch a 1-0 win against district rival #18 Ursuline at Jesuit High School on Wednesday night. Ursuline mounted an impressive attack throughout the first half but the Lady Vikings we able to turn the tides a bit in the second half and chip away at the 18-time TAPPS State Champion, Lady Bears. The game started to open up for both teams just when junior midfielder, Maygan Ditucci (insert) was able to take a throw-in from fellow junior, Kaytee O'Brien, to the goal getting around a Lady Bear defender to the top of the box and was able to put away the eventual game-winner to the far post, her second in as many games. The Lady Bears, who usually answer after getting scored on were not able to get in behind the stubborn Nolan defense and the Lady Vikings held on for a 1-0 shutout win taking a 9 point lead over the 2nd place Bears in district play. This marks the first time the Lady Vikings were able to shutout Ursuline in the history of the program.

Ditucci scores number 3, 4, and 5 on the year in her last 3 games. She also has 5 assists for a total of 15 points. She also scored during the first meeting with Ursuline.
Click on the following link to see the story in the Fort Worth Star-Telegram.
http://www.star-telegram.com/highschools//story/1089385.html

The Nolan Women's Soccer Team played host to Plano Prestonwood on Friday night and moved to 12-0 on the season with a 6-0 victory. Haley Spotts started the scoring off for the Lady Vikings while Baum, Smith, Rios, Smithey, and Ulliman each scored a goal. The Lady Vikings head into Finals next week and Christmas Break so an unblemished record for 2008 is a first in program history. The Lady Vikings are back in action on Saturday, January 3rd, 2009 for the Alumni Game at 11:00am at Doskocil Stadium.
Posted by . at 12:52 AM No comments:
Email ThisBlogThis!Share to TwitterShare to FacebookShare to Pinterest

The Lady Vikings move to 9-0 with 2 more district wins over Faith Christian and Bishop Dunne by a combined score of 15-0. Eight different players scored for the Lady Vikings. Emily Grider scored 3 goals between the 2 matches as well as seniors, Mallory Baum and Morgan Ulliman. The Lady Vikings have a busy week next week with matches against Lynch, Ursuline, and Prestonwood.
Posted by . at 11:48 AM No comments:
Email ThisBlogThis!Share to TwitterShare to FacebookShare to Pinterest

The pre-season National Rankings were released on Tuesday by ESPN and the Lady Vikings sit at #17, which is the second highest pre-season ranking in Nolan history. The Lady Vikings are 8-0-0 on the season and just started a 4-game road trip defeating Faith Christian 8-0 on Monday. Wednesday they travel to Bishop Dunne and follow up with Bishop Lynch next Monday and #18 Ursuline on Wednesday before they return home to host Plano Prestonwood to close out the semester.

To see the Top 25 visit ESPN at http://sports.espn.go.com/highschool/rise/soccer/news/story?id=3739596.
Posted by . at 12:02 AM No comments:
Email ThisBlogThis!Share to TwitterShare to FacebookShare to Pinterest
Newer Posts Older Posts Home
Subscribe to: Posts (Atom)