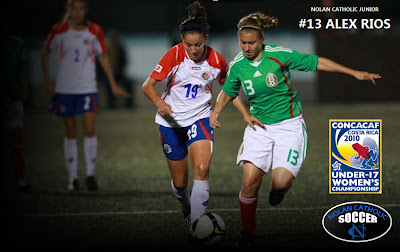 03/22/10 - Although the U.S. under-17 women's national team failed to qualify for the 2010 Women's Under-17 World Cup, there a few American high school students who will be competing in the games.

Alex Rios, a junior defender at Nolan Catholic (Fort Worth, Texas), and Christina Murillo, of Ojai, Calif., played for the Mexican under-17 squad that finished the CONCACAF Championships as a runner-up to Canada.

Rios' e-mail to her high school coach Jay Fitzgerald read, "I'm so excited to qualify for World Cup. Being part of this is something that I've been dreaming about since I started soccer. To be doing this at such a young age is my dream and I'm making it happen. It's the most amazing feeling in the world."

Mexico advanced to the final with a 3-1 overtime victory over Costa Rica in the semifinals, a match that featured a dramatic overtime goal by Murillo that sparked the victory. That result secured Mexico of one of the two CONCACAF bids to the World Cup.

"That feeling at the end of the game was unforgettable," Rios wrote. "Being able to qualify after that kind of fight through our bracket then the semifinals, it was just the best feeling in the world. It felt like the game was never going to end, but when it did I didn't want to get off that field. After the game ended and we were celebrating, I didn't want that feeling to go away once I left the field."
Posted by . at 10:19 PM No comments:
Email ThisBlogThis!Share to TwitterShare to FacebookShare to Pinterest

The soccer banquet this Friday night will be at Woodhaven Country Club from 6:00pm-9:00pm. We will come together one last time to celebrate another exciting year for Lady Vikings Soccer. The event will include a dinner buffet, awards presentation, senior presentation, special presentation, and the end of the year video. 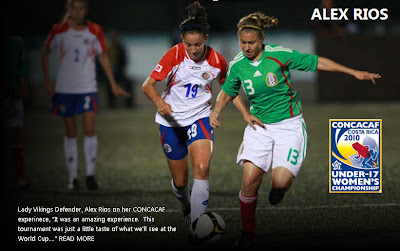 Lady Vikings Defender, Alex Rios and the Mexican U17 Women's National Team came up short against Canada 1-0. The games only goal was scored in the 8th minute and Mexico was unlucky dispite playing with a man advantage due to a Canadian player being sent off. Late in the game Mexico hit the crossbar twice. None the less they have earned a berth in the FIFA Under-17 Women's World Cup in September.

"It was an amazing experience. This tournament was just a little taste of what we'll see at the World Cup," Rios commented, "Losing this game didn't really matter to us. Yeah, it would have been nice to win, but both of these amazing teams are going to something bigger than this tournament. I'm so proud to be part of this team, and I can't wait for World Cup this September!"

See the match tape delayed on FOX SPORTS ESPANOL on Sunday, March 21st at 6pm. Click on link below for highlights of the final.
Concacaf Main CONCACAF Home Competitions Women's Under 17s Videos Women's Under 17s Video Women's U17 Final Mexico v Canada Highlights
Posted by . at 11:21 PM No comments:
Email ThisBlogThis!Share to TwitterShare to FacebookShare to Pinterest

ALAJUELA, Costa Rica - Congrats to Alex Rios, Lady Vikings Junior Defender, has qualified for the 2010 Women's Under-17 World Cup. She is a member of the U-17 FIFA Women's National Team of Mexico and has 4 caps thus far in the tournament. Mexico defeated Costa Rica 3-1 in route to the championship against Canada on Saturday, March 20th. Watch LIVE on http://www.concacaf.com/. Rios' dreams come true, "I'm so excited to qualify for World Cup. Being part of this is something that I've been dreaming about since I started soccer. To be doing this at such a young age is my dream and I'm making it happen. It's the most amazing feeling in the world."

Christina Murillo scored from the kickoff that started the second extra time period and Mexico beat Costa Rica 3-1 Thursday night to reach final of the CONCACAF Under-17 Women's Championship.

Murillo dribbled just beyond the midfield circle before launching a right-footed blast that arced over Costa Rican keeper Fabiola Murillo and just under the bar.

Tanya Samarzich added an insurance goal in the 110th minute to assure Mexico of facing Canada in Saturday's final. The two will join host Trinidad and Tobago at the World Cup in September.

Rios after the game, "That feeling at the end of the game was unforgettable. Being able to qualify after that kind of fight through our bracket then the semi-finals, it was just the best feeling in the world. It felt like the game was never going to end, but when it did I didn't want to get off that field. After the game ended and we were celebrating, I didn't want that feeling to go away once I left the field."

Since CONCACAF member Trinidad & Tobago will host the U-17 FIFA Women’s World Cup in September, just two World Cup berths instead of the usual three were available at this 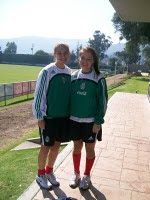 tournament, both going to the winners of the semifinals. This means the US doesn't qualify for the first time ever.

This is such a special moment for Rios as she looks forward to the championship against Canada on Saturday, "Going into the final of this tournament makes me so excited.I know that this is going to be one of the hardest games ever even though we've beaten Canada twice. They have always put up a good fight and I don't doubt that they will put up a good fight on Saturday."
Posted by . at 10:13 PM No comments:
Email ThisBlogThis!Share to TwitterShare to FacebookShare to Pinterest

After the catastrophic earthquake that struck Haiti in early January, no one thought Haiti’s U-17 Women’s National Team would be able to compete at the CONCACAF U-17 Women’s Championships in mid-March in Costa Rica. But despite all odds, they are here, and the players from their first opponent – the United States -- are filled with both empathy and admiration.

Before Jan. 12, the opening match for the USA at the CONCACAF Under-17 Women’s Championship was just a game. A vitally important game for sure, but it was just another step in a quest for a berth to the 2010 FIFA U-17 Women’s World Cup.

That all changed when the ground started shaking in Port-au-Prince.

The 7.0 magnitude earthquake that struck Haiti produced tragic images streamed across TV sets in America and the world. Even before the quake, Haiti was one of poorest countries in Western Hemisphere, but the pictures were almost unimaginable. An estimated three million people were affected, at least 230,000 people were killed (although the figure continues to grow), 300,000 more were injured and more than 1,000,000 were left homeless. An estimated 250,000 homes and 30,000 businesses collapsed or were severely damaged, among them the headquarters of the Haiti Soccer Federation.

The head coach for Haiti’s U-17 Women’s National Team died when that building fell, along with more than 30 officials of Haiti’s soccer federation.

Amazingly, Haiti was able to gather their U-17s and travel together to the neighboring Dominican Republic to train and prepare for the tournament. The match against the United States on March 10 at Alejandro Morera Soto Stadium in Alajuela, Costa Rica, will be the first international sporting event for Haiti since the disaster.

“Sports have the power to unite people and the fact that Haiti was still able to assemble their team and come to the CONCACAF championships is a testament to the great spirit of their players and administrators,” said U.S. U-17 Women’s National Team head coach Kazbek Tambi. “So many people lost their lives and it’s likely that every player on their team had relatives or friends that passed away. It’s a traumatic situation and the fact that they have mustered the character to come here is pretty amazing.”

The tragedy produced an outpouring of support and aid from around the world. The U.S. U-17s will also do their small part to try to brighten the spirits of the Haitian players. Each U.S. player brought to Costa Rica a small bag or backpack filled with things they thought another 16 or 17-year-old might enjoy as well as some basic items that often might be taken for granted. The U.S. Women’s National Team also donated a few large duffel bags full of used cleats and new Nike casual gear for the U-17s to give to the Haiti players while Nike sent a bushel of new soccer shoes to be passed on to the USA’s Haitian counterparts. Each U.S. player wrote a note of support for the Haitian players and put it inside the bag she brought.

The U.S. is making arrangements to give the gifts to Haiti following the completion of the first round. First, though, there is a soccer game to be played. And while the U.S. players will have the plight of the Haitians on their minds before and after the match, they know that during the 90 minutes on the field, they must focus the task at hand, for their team, for their country and for themselves.

“For them to be here, I think just shows a lot of perseverance, their drive to succeed and their desire to do something positive for their country,” said U.S. captain Morgan Brian. “We have a lot of respect for them and I know I speak for our entire team when I say that I don’t know if we, as individuals, would be able to play if we had to face the tragic circumstances they have in their lives right now.”

For the most part, all of the U.S. players come from comfortable homes in quiet neighborhoods not far from great soccer fields in beautiful sports complexes. For them, it is difficult to imagine what the Haitian players must be going through. But as part of the process of growing into positive young women with an awareness of the world and empathy for those less fortunate, they are trying to.

“I think it’s incredible that they’ve come to play this tournament,” said U.S. midfielder Alex Doll.
“They’ve lost their homes, family members and their friends. It’s just really cool that these girls are able to represent their country and hopefully they can inspire the people of Haiti just a little bit. I know we are inspired by them.”

“We know they will be fighters on the field and that will be a challenge in itself,” added Brian. “After what they’ve been through, a ninety-minute soccer game might not be that tough.”

Haiti’s participation in the tournament is an example of how sports can help overcome adversity. No matter what the result of the USA-Haiti game, it is clear that just by being at the qualifying tournament, Haiti has already won.

“We just think it’s cool that it’s not the full men’s national team that is representing Haiti for the first time since the earthquake, it’s a group of 17-year-old girls,” said Doll. “They are playing for something bigger. We have to believe that when you’ve had so much taken away, to still have one thing you love, and that’s soccer, well, that’s a great thing.”
Posted by . at 11:51 AM No comments:
Email ThisBlogThis!Share to TwitterShare to FacebookShare to Pinterest

State-level US Youth Soccer ODP Boys and Girls teams in the 1993 and 1994 age groups will play semifinal matches on Friday, March 12, beginning at 1 p.m., with championship and consolation matches to be played Sunday, March 14 beginning at 8 a.m. The teams competing have qualified by winning their respective age group at their US Youth Soccer ODP Regional Championships.
Posted by . at 10:06 PM No comments:
Email ThisBlogThis!Share to TwitterShare to FacebookShare to Pinterest

The Lady Vikings have more players represented on the All-District and All-State Teams in the history of the program. Congratulations to the Lady Vikings!!