The following is a breakdown of what is expected out of student-athletes that plan on trying out for LVS for the 2017-2018 season.

EVERYTHING BELOW IS EXPECTED TO BE A PART OF LVS18

We understand you may not be able to make everything but you must make the majority of the summer plans.  There will be fitness expectations in order to make the team next year so summer training and conditioning is very important to have an opportunity to be a part of LVS18.

Complete physical ON June 1st (needs to be dated June 1st or after not before)
*Cannot participate in any summer activity without turning in your physicals.
*Will count as physical for the 17-18 season
*Please try and do the physicals from Dr. Dolce as they benefit the Athletic Department.
*Cost $25/ walk ins welcome

Dr. Dolce and several other associates will be providing physicals on June 1st and 3rd in the arena. (Proceeds benefit athletics)

All incoming freshman are expected to sign-up for the Summer Conditioning Program as well as the June Soccer Camp and July Team Camp.
http://nolancatholichs.org/summer-athletic-camps/

Current LVSers…
Work June Summer Camp (Training after camp)
Weekly Training
Sign Up for Summer Conditioning at least twice a week *If you can’t go to the SC sessions on the calendar then go to other sessions during the week.
Attend July Team Camp
Team Retreat (July or August)

Contact Head Coach, Jay Fitzgerald with any questions at 817-917-1491 or jay@jatoathletics.com

Posted by . at 10:30 PM No comments:
Email ThisBlogThis!Share to TwitterShare to FacebookShare to Pinterest

The Lady Vikings Soccer Program held their annual end of season banquet in April to recognize their tremendous season but one more special night remains.  The Inaugural Vikings Sports Performances of the Year Awards Show debuts this Sunday Night better known as the VSPYS.  The entire athletic department, all the teams, players, parents, coaches, administrators, and supporters will be in attendance.  The goal of the VSPYS in its first year, will be for it to be the most anticipated night of the year for the athletes.  It is a time where the Nolan Catholic athletic community can get together to celebrate the accomplishments and moments on and off the field.

"I have seen some amazing Nolan Catholic end of the year sports banquets and some not so good ones but this year we plan to knock it out of the park.  All the players in this school deserve this, it needs to be a special night and we want people to want to be there."  LVS Head Coach/VSPY Nominee Jay Fitzgerald

Nominations have been presented to the athletes of all the teams this week and the Lady Vikings Soccer Program has been nominated for a total of 14 VSPYS including Best Team, Best Game, and Best Coach.

"It was really cool to be nominated this year.  I had so much fun with this team and can't wait to see what everyone wins!"  VSPY Nominee Hannah Allred

It all starts with the athlete arrival where athletes, teams, and coaches will walk the "Blue Carpet" at 5:15pm.  Seating begins at 6:00pm and the show starts at 6:15pm.

"I am really excited to have been nominated for a VSPY this year!  I worked really hard this season and looks like it is now paying off.  Best of luck to all the other nominees as well."  VSPY Nominee Megan Bettinger

"I am so honored to be able to present at the VSPYS for all these great athletes!  They worked so hard and I can't wait to see the outcome! Go Vikes!!" VSPY Presenter Maddie Caffey

Naturally the biggest plays, most unexpected upsets and record-breaking performances are celebrated.  The VSPYS will not just celebrate sports achievements, it honors the competitive spirit as well as instances of strength and determination that go beyond sports, the fans that make the place shake, the volunteers that work behind the scenes, and lets not forget the moments in the community that represent us all with the utmost character and pride.

"It is an honor to be involved with such an amazing program like LVS and an honor to be able to show our appreciation through this awards ceremony to all the other wonderful programs." VSPY Presenter Deborah Cottrell

"I'm really excited to be nominated in three different awards.  I'm excited to not only be able to experience the first annual VSPYS but to be included in it.  Thank you for the nominations and I cannot wait to see what happens."  VSPY & Don Thompson Nominee Kate Kleiser

"I'm not special for coming back from an injury, but it allowed ma a chance to comeback stronger and has made a huge difference in my career as a soccer player.  So I am extremely grateful for a nomination for the best comeback player."  VSPY Nominee Emily Keoughan 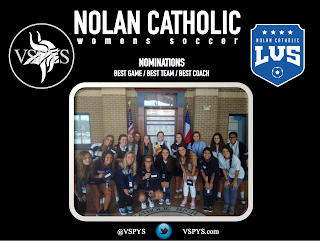 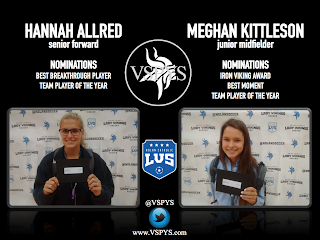 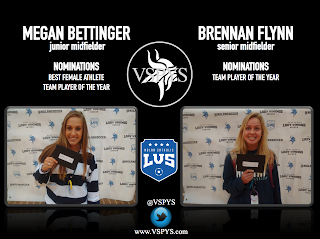 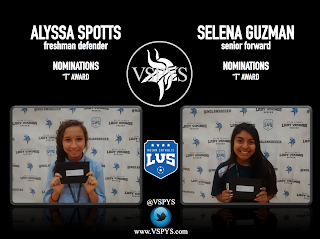 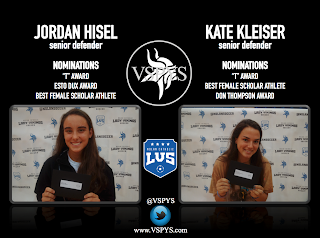 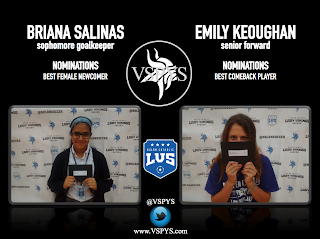 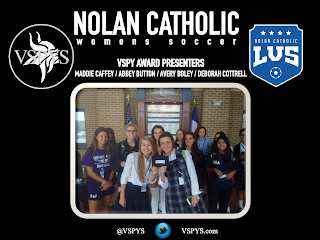 Posted by . at 6:51 PM No comments:
Email ThisBlogThis!Share to TwitterShare to FacebookShare to Pinterest
Newer Posts Older Posts Home
Subscribe to: Posts (Atom)