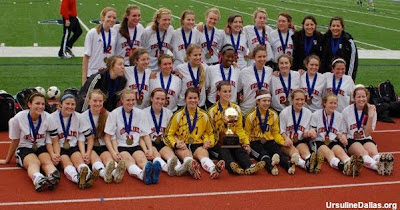 You'll have to forgive the Ursuline (Texas) Academy girls soccer program if it feels a little aggrieved, despite winning what should be a national-record 21st straight state title on Saturday. The Bears have good reason to be upset: Despite the fact that their 21 consecutive titles is a national record, it's not being credited as a nationwide mark because of the association in which Ursuline competes.

As pointed out by the Dallas Morning News' Corbett Smith, Ursuline competes in the Texas Association of Private and Parochial Schools -- TAPPS -- just as all other private schools across the state do. That stands in sharp contrast to most states across the country, which integrate public schools and private schools in the same athletic governing body.

As it turns out, in states that have separate public and private athletic organizations, only the public leagues are considered when determining historic records. Therefore, the 21 trophies currently ensconced in the Ursuline athletic facilities are worth little more than two decades of bragging rights over other all-girls schools, according to the folks at the National Sports Record Book.

According to Smith, Portland (Ore.) Catlin Gable High holds the record for most consecutive girls soccer titles with 11. That's right, the current record-holders have been outdone by the Bears by a whopping decade worth of state titles, yet are still recognized as the most successful streak-owning girls soccer program in the nation.

If there was any question that Ursuline was deserving of recognition, the Bears likely answered those questions in their title-game victory. After falling behind by a goal in the early moments, Ursuline responded with four consecutive goals to run roughshod over runner-up Fort Worth (Texas) Nolan Catholic School, 4-1.

"At this point in the season it's more about emotion then about technical or tactical play," Ursuline coach Jamie Cantrell told the Morning News. "We knew if we got down one, we trained for it."

At that point in the season, Cantrell's team has known exactly what to do time and again. It's just time that the rest of the country acknowledged its greatness.

Want more on the best stories in high school sports? Visit RivalsHigh or connect with Prep Rally on Facebook and follow us on Twitter.
Posted by . at 7:49 PM No comments:
Email ThisBlogThis!Share to TwitterShare to FacebookShare to Pinterest

Nolan Catholic earns another shot at Dallas Ursuline Boys soccer DFWVarsity.com
Posted by . at 8:00 AM No comments:
Email ThisBlogThis!Share to TwitterShare to FacebookShare to Pinterest

The Lady Vikings score early and that is all they needed in route to a 1-0 win over John Paul. Senior, Alex Rios scores off an assist from Emma Chandlee in the 2nd minute.

LSU commit, Paige Harris was flawless in goal, shutting out her third opponent in a row for a total of 10 on the year.

"We expected to be in the State Championship and these young ladies played like that," commented head coach Jay Fitzgerald, "they are a different team from the regular season and they belong here." The Lady Vikings defeated John Paul for the 2nd time this year, the last being on January 4th which was a milestone for the Nolan Catholic Women's Soccer team marking the programs 400th win since 1986.

The State Championship is nothing new for the Lady Vikings, as they have advanced to the final for the 11th straight year facing Ursuline in each of those years.

Ursuline defeated San Antonio Antonian 7-0 in the semi-final game. The State Championship is tomorrow at 12:00pm at Heros Stadium in San Antonio.
Posted by . at 10:00 PM No comments:
Email ThisBlogThis!Share to TwitterShare to FacebookShare to Pinterest 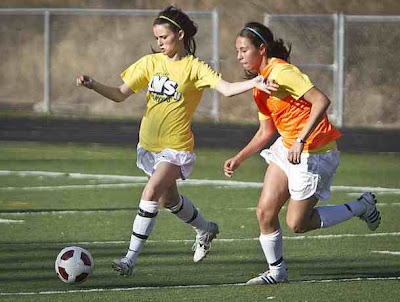 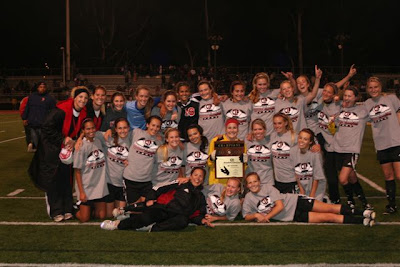 LVS has developed a special bond with the San Clemente Women's Soccer Team from California. We want to wish our sister team, the Lady Tritons, a special congratulations on advancing to the CIF SS Division 1 post-season playoffs as the #1 seed. San Clemente will take on Orange Lutheran High School in the first round on Thursday.

San Clemente traveled to Fort Worth in January to compete in the Nolan Showcase Presented by JATO and went undefeated with wins over #19 Southlake Carroll, #6 St. Thomas Aquinas (FL State Champion), and Dallas Ursuline Academy.

The Lady Vikings showed the Tritons a night of Texas hospitality at the Fort Worth Stockyards. The teams feasted at Coopers BBQ and then danced the night away at the World's Largest Honky Tonk, Billy Bob's of Texas. Ending the night mixing it up with as many flavors and toppings as their little heart desired at Menchie’s. Good times in Fort Worth. 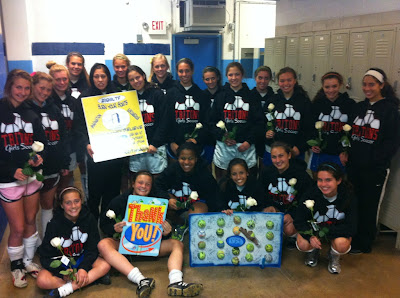 As San Clemente advances to CIF post-season play, so has the Lady Vikings. They travelled to Houston to defeat St. Agnes and gain their 11th straight Regional Championship. With the win, the Lady Vikings have advanced to the TAPPS Women's Soccer Final Four in San Antonio which kicks off on Friday. Good luck to both teams and here is to athletics bringing new friendships together.
Posted by . at 10:07 PM No comments:
Email ThisBlogThis!Share to TwitterShare to FacebookShare to Pinterest

Posted by . at 2:26 PM No comments:
Email ThisBlogThis!Share to TwitterShare to FacebookShare to Pinterest

Eleven years and counting, the Lady Vikings take the Regional Championship back to Fort Worth and advance to the TAPPS Women's Soccer Final Four next Friday in San Antonio.

One goal was all it took for Nolan Catholic and that goal was the first of the season for junior, Alex Perez. It came in the 61st minute. Perez took a perfectly placed cross from senior, Sara Chandlee and flicked it over the Lady Tigers goalkeeper.

"We have necessarily been opportunistic and have underachieved for most of the year but not today," said Lady Vikings head coach Jay Fitzgerald, "It is the playoffs and we are a different team."

Another road win for the Lady Vikings brings them one step closer to a State Championship. Seven out of the 10 wins for Nolan Catholic have come on the away from home.

Experience and emotion are huge this time of year and the Nolan Catholic Women's Soccer Team have been here and that competitive edge got them to another Final Four.

The Lady Vikings will take on John Paul on Friday at 11:00am at San Antonio's Heros Stadium for a chance to play in the State Championship match the following day at 12:00pm.
Posted by . at 10:50 PM No comments:
Email ThisBlogThis!Share to TwitterShare to FacebookShare to Pinterest

Multiple goals, a clean slate, and a road win, move the Lady Vikings one step closer to State. Senior, Forward Kayleen Negron gets the game-winner in the 5th minute and that is all the Lady Vikings needed to move on to the Regional Championship match on Saturday.

Junior, Forward Lindsey Murray added another goal half way through the first half for her 6th goal of the season.

"It is nice to see contribution from our forwards and players coming off the bench," commented head coach Jay Fitzgerald. Its shows the depth and versatility that the Nolan Catholic squad has. Of the 21 players on the team, 13 of them have scored a goal. "We are excited about our chances in the playoffs," Fitzgerald said, "We are playing with a chip on our shoulder."

The Lady Vikings held Austin St. Michael's to 3 shots the entire match and took 23 of their own. The field was not as expected; it was narrow and hard but the Lady Vikings dealt with the environment with a shutout win, on the road and in the playoffs.

The Nolan Women's Soccer team enjoys going on the road, as the majority of their wins have come away from home. Fitzgerald went on to say, "I look forward to taking my team away from home - it gives us a chance to show off our program. I am proud of these young ladies"

Well, Fitzgerald and his program will get to do that for the remainder of the season as they travel to Houston to take on St. Agnes on Saturday and with a win there, they advance to the Final Four the following weekend in San Antonio.
Posted by . at 11:53 PM No comments:
Email ThisBlogThis!Share to TwitterShare to FacebookShare to Pinterest 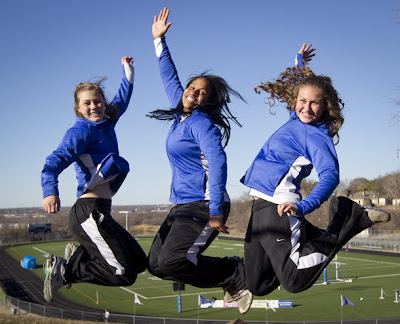 Three soccer signees continue a Nolan Catholic tradition High Schools DFWVarsity.com
Posted by . at 9:33 AM No comments:
Email ThisBlogThis!Share to TwitterShare to FacebookShare to Pinterest

The Lady Vikings Soccer program is proud to announce that 3 seniors will continue their soccer careers in college. Sara Chandlee, Paige Harris, and Alex Rios all signed today on National Signing Day. Harris and Rios will both be attending college in Louisiana at LSU and Northwestern State University, respectively, while Chandlee will be heading east to Iona College in New York.

These 3 players have left an impressive stamp on the Nolan Catholic Women's Soccer Program, helping the Lady Vikings to over 40 wins and 40 shutouts, a District Championship, 2 District Runner-Up finishes, 2 Regional Championships, 2 State Runner-Up finishes, National rankings as high as #12 and #7 in the country, and a program milestone with win #400 in January.

"It is another exciting moment for our program and for these young ladies," head coach, Jay Fitzgerald explained, "They deserve the opportunity to play soccer at the next level and we wish them the best."
Posted by . at 11:55 AM No comments:
Email ThisBlogThis!Share to TwitterShare to FacebookShare to Pinterest

Fort Worth, home to the Lady Vikings Soccer team, welcomes the SuperBowl. The Pittsburgh Steelers are staying just minutes from Nolan Catholic High School.
It is an exciting time to be in Fort Worth as ESPN has set up camp in Downtown Fort Worth in Sundance Square.
A fly-over is scheduled for Friday, February 4th at 5:35pm down the Tom Landry Highway which runs right in front of Nolan Catholic High School.
Posted by . at 10:19 AM No comments:
Email ThisBlogThis!Share to TwitterShare to FacebookShare to Pinterest
Newer Posts Older Posts Home
Subscribe to: Posts (Atom)