Check back for links to full teams or check on the TAPPS website at http://www.tapps.net/ under winter soccer.
Posted by . at 11:02 AM No comments:
Email ThisBlogThis!Share to TwitterShare to FacebookShare to Pinterest

The Lady Vikings season ended in a heartbreaker as Kimberly Polasek's goal off a corner kick with 16 seconds left in the second 10-minute overtime lifted the Tigers (21-1-2) to victory at Benson Stadium.

Soccer is a cruel game and probably the only game where a team can own the majority of the game and come away with a loss. The Lady Vikings outshot the Tigers 11-3 where the only 3 tiger chances came off of set plays, 2 of which found the back of the net.

At 13-8-7, Nolan Catholic had three opportunities to score in the final 8 1/2 minutes, off two free kicks and one corner kick all well within goal range, but were denied each time.

The closest came with 8:20 remaining when freshman, Chelsea Surpris' free kick from 24 yards out ricocheted off the top cross bar and followed up by 2 rebound shots, one hitting a Nolan player and one was picked off by the St. Agnes goalkeeper.

"We had chances to win, but you have to execute, period," Vikings coach Todd Fitzgerald said. "We just couldn't finish it."

Ashley Ficsher used Gabbie Puente's outside cross to put Nolan ahead 1-0 early in the second half. St. Agnes answered with 10:30 remaining in the game when Allison Carter tapped in the equalizer off a corner kick.

Most of the contest was played in a constant miserable drizzle, and overtime was delayed nearly an hour due to lightning in the area.

The future looks extremely bright for the lady Vikings as they only lose 4 seniors and return 16.
Posted by . at 1:03 AM No comments:
Email ThisBlogThis!Share to TwitterShare to FacebookShare to Pinterest

The Lady Vikings are in the Final Four for a 12th straight year and making the most of it. It is about routine, sticking to a plan, and grinding it out.

Nolan Catholic Women's Soccer prides itself each year on playing one of the toughest schedules in the country. They already play Ursuline twice in district play and then kick off the New Year by hosting the best high school girls soccer showcase in the country with teams spanning from the West Coast to the East Coast.

Pressure is important to the success of the program and with 10 underclassman on the roster this season, that is what they have been faced with. Those youngsters account for over 50% of the Lady Vikings scoring this season. This would not be possible without the experience that the upperclassman have been through.

In the post-season, that is what matters... Experience. Have you been there? Well for 3 players on the team, the Final Four is a familiar place. Senior, captain Megan Billingsley has played in 3 while fellow seniors, Lindsay Murray and Allaire Langdon have both participated in State Championships. Murray scored the last goal for the Lady Vikings in the State Championship, just 3 minutes into the match against Ursuline last year.

The Lady Vikings start the weekend tomorrow morning at 11:30am at the University of Incarnate Word vs St. Agnes, whom Nolan defeated last season in the Regional Championship by a score of 1-0.
Posted by . at 11:00 PM No comments:
Email ThisBlogThis!Share to TwitterShare to FacebookShare to Pinterest

Regional Champs once again; On to the Final Four 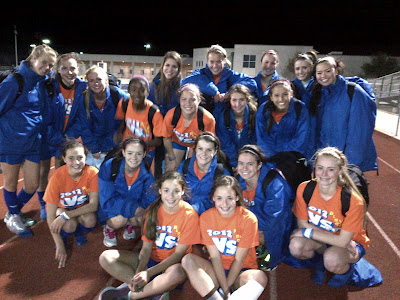 Lady Vikings win 12th straight Regional Championship, their 23rd overall. Gwennie Puente scores her 18th just into the 2nd half to put Nolan on the board. Kathleen Keoghan played a ball out of the back and Emma Chandlee collected the ball at midfield who slipped a nice ball over the top to Puente for the first goal.

Chelsea Surpris drove a free kick just inside the near post for her 3rd of the year which turned out to be the game-winner. The Lady Vikings gave one up in the 73rd minute but not before senior, captain Megan Billingsley put the Lady Vikings up by 3 off a corner from Surpris.

Tonights game saw the Lady Vikings outshoot Antonian 22-2 with a 8-0 edge in corner kicks. Now at 13-7-7 on the year, the Lady Vikings look to advance to their 12th straight State Championship match.

The Lady Vikings will head to the Final Four next Thursday in San Antonio. The 1st semi-final will be played at 9am (Ursuline vs Bishop Lynch) and the 2nd semi-final will match up the Lady Vikings against St. Agnes. The Lady Tigers defeated John Paul in a shootout 3-1.
Posted by . at 7:22 PM No comments:
Email ThisBlogThis!Share to TwitterShare to FacebookShare to Pinterest

Regionals in Austin this Friday 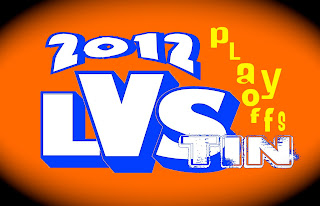 The Regional Match between Nolan Catholic and San Antonio Antonian will be played this Friday at 5pm at Hendrickson High School Stadium in Pflugerville, TX.

CLICK HERE for Stadium Information and Directions
Posted by . at 12:10 AM No comments:
Email ThisBlogThis!Share to TwitterShare to FacebookShare to Pinterest

FORT WORTH - The Nolan Catholic Women's Soccer team moves on in the playoffs after a 4-0 win over Houston St. Pius X this morning.

Junior, Maggie Kleiser got the scoring started with her 30 yard blast in the 16th minute. Kleiser scored a similar goal the week before on the road against St. Stephen's.

The match started out a bit slow with both teams trying to settle in and get a rhythm but the Kleiser goal ste the tone and in minute 24 and 36 on a pair of goals from freshman, Gwennie Puente.

Outshooting the Lady Panthers 24-2, the Lady Vikings continued to put on the pressure but the St. Pius X, goalkeeper came up with some impressive saves.

Senior, Lindsay Murray had 6 shots on goal herself and was finally able to put in her 7th goal of the year in the 75th minute.

The Lady Vikings earned a first round playoff game and were happy to get to play one last match at home before going on the road this Friday against San Antonio Antonian. Details TBA. The winner will then move on to the State Final Four which is being held in San Antonio for the 3rd straight year.

With the win, the Lady Vikings improve to 12-7-7 overall.

St. Pius X Goals (Assists)
None
Posted by . at 1:25 AM No comments:
Email ThisBlogThis!Share to TwitterShare to FacebookShare to Pinterest

It all starts tomorrow; the new season is here

Light training today consisted of a trip to Northeast Mall for LVS Time.... That TIME IS NOW!! The Nolan Catholic Women's Soccer Team took in a scary movie and headed to dinner in preparation for the Area Round of the TAPPS Playoffs which kicks off tomorrow at Doskocil Stadium on the campus of Nolan Catholic High School. The match will begin at 11:00am.

The Lady Vikings were not as fortunate last year when they had to go on the road during their entire playoff run, NOT THIS YEAR. They have done what they needed to do to host the first round in front of their fans.

The 11-7-7 Lady Vikings are young, experienced, and confident. Those are the ingredients needed to make another run at a State Championship. The Final Four is set in San Antonio again. Regionals will be at a neutral site.

Come out and support your Lady Vikes!!
Posted by . at 10:43 PM No comments:
Email ThisBlogThis!Share to TwitterShare to FacebookShare to Pinterest 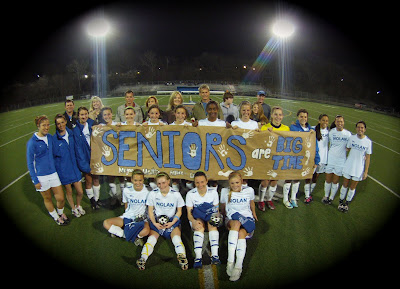 The Lady Vikings spent the first 8 weeks of the season ranked in the Top 30 in the country, as high as #19, in the ESPNHS National Poll.

After going 2-1-1 in the nations top high school showcase, the National Elite Prep Showcase, they hit a bump in the road against the nations #2 team, Marcus. They then, were one game away from advancing to back to back Allison Horn Memorial Showcase Championship games before being upended by Keller.

After 2 consecutive showcase weekends, the Lady Vikings traveled down to Austin to face St. Stephen's which ended in a draw. That trip was all the Lady Vikings needed to realize they are playing their best soccer of the season.

On senior night, this past Tuesday night, they fell behind to 4A public school powerhouse, Highland Park, before storming back in the 2nd half on a Emma Chandlee equalizer.

Highland Park is currently undefeated. After they evened the score, the Lady Vikings had several chances to go ahead but eventually ran out of time and had to settle for another draw, their 7th draw of the season.

"We pride ourselves on playing the nations most competitive schedule year in and year out," said Nolan Catholic head coach, Todd Fitzgerald. He added, "We want our young ladies to feel the pressure on a regular basis, because now a days, that is life and it is extremely important that our players leave this program with the necessary skills on and off the field to make intelligent decisions as they move on to the next stage of their lives."

The education of life through soccer is what Lady Vikings Soccer is all about.

The Lady Vikings finish the regular season with an overall record of 11-7-7 which has put them in a position to host Houston St. Pius X in the Area Round of the TAPPS Women's Soccer Division 1 Playoffs.

Now, records are all at 0-0-0 and the Lady Vikings will look to improve on their consecutive streak of 12 straight State Championship appearances. Saturday kick-off is set for 11:00am at Nolan Catholics Doskocil Stadium.

Come out and support your Lady Vikings.
Posted by . at 1:10 AM No comments:
Email ThisBlogThis!Share to TwitterShare to FacebookShare to Pinterest
Newer Posts Older Posts Home
Subscribe to: Posts (Atom)