Off-Season up and running

Competition never stops at LVS. Off-Season training began today and will continue into May every Monday and Friday. The goal of off-season training is to develop an overall comfort level amongst the group. It is important for the players to learn each others tendencies. The focus is attention to detail, making soccer decisions and solving problems in a small-sided, fun environment.
Posted by . at 10:27 PM No comments:
Email ThisBlogThis!Share to TwitterShare to FacebookShare to Pinterest

Off-season training begins on Friday. Training will be for only a hour from 3:30pm-4:30pm. All players who are not currently playing another sport are expected to attend, junior varsity and varsity players. Players need cleats only. Full schedule is to the right under "Weekly Schedule".
Posted by . at 10:30 AM No comments:
Email ThisBlogThis!Share to TwitterShare to FacebookShare to Pinterest

The end of the year came a bit too soon for the youngest team in school history with 9 underclassman and only 4 seniors. With a 12-7-7 overall record, with a National Ranking as high at #19, the Lady Vikings proved that they deserved the national respect they continue to receive.
They continue to host the nations top high school showcase, 10 years running, while making it to the Final Four for the 12th straight year, 20 in all since 1990. Twelve straight Regional Championships and a bright future for this group of young ladies to add to the storied history of Nolan Catholic Lady Vikings Soccer.
The Annual LVS Team Banquet is this Friday at Woodhaven Country Club. The LVS Varsity Team will be joined by their family and friends to look back on tons of memories from another amazing year.
Doors open at 6:30pm as everyone gets settled with pictures and bonding as dinner will follow. The program will begin after dinner approximately 7:40pm. Then the traditional LVS12 Movie: Cherish the Memories premiers at 8:30pm. It is a wonderful 80 minute production of a year full of friendship, memories, good times and don't forget, plenty of soccer.
Posted by . at 3:26 PM No comments:
Email ThisBlogThis!Share to TwitterShare to FacebookShare to Pinterest 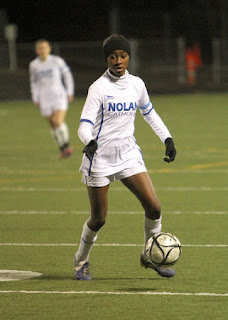 IDing the top 11 from the Dallas ECNL PDP event

ESPNHS spoke with a few of the coaches who helped make it all happen after the event to find 11 players who stood out this weekend. Players are listed with club and high school.

Coaches say: “Katie was one of the most versatile players we worked with this weekend. She’s really active, and seemed to always be around the ball. Attacking, defending, and communicating, she’s a great midfielder.”

Coaches say: “She’s tall, and she’s just a ball winner. She controls everything in the middle. She has great presence in the midfield, and she can really be dangerous on the dribble.”

Coaches say: “She’s a very dynamic player in the central midfield, always buzzing around. She really stood out as a top midfielder this weekend.”

Class of 2013 – Verbally committed to Baylor

Coaches say: “She’s a very strong player, and not afraid to play physically. She defended well, and turned out to be very active on the pitch.”

Coaches say: “She played a bit of midfield and forward, and really has the ability to do both very well. She showed herself to be a very versatile player.”

Coaches say: “She’s technically a very solid attacking midfielder, but basically plays like a forward. Just solid all the way around.”

Coaches say: “She’s probably the best all around attacking player in the area. She plays all facets of the game well.”

Coaches say: “She’s really everything you want in a center back. She can shut down to most dynamic kids, and does a great job cleaning up everything in the area.”

Coaches say: “When Meagan is on the pitch, she’s probably the most dangerous and dynamic player coming out of the back. She’s a defender who really helps your offense and midfield out.”

Coaches say: “She’s a freshman, but she didn’t look like it this weekend. She played right back, did a really solid job of shutting down some very dynamic players, and also did a great job of getting forward at the right times.”

Coaches say: “She’s a big time ball winner and she shuts down everything back there. She’s also a great passer out of the back, and rarely ever gives up the ball.”

Posted by . at 9:08 PM No comments:
Email ThisBlogThis!Share to TwitterShare to FacebookShare to Pinterest
Newer Posts Older Posts Home
Subscribe to: Posts (Atom)