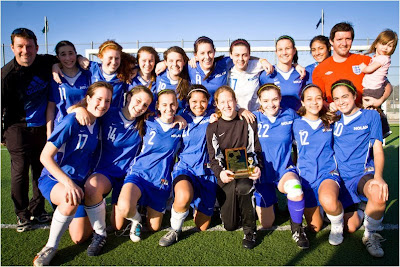 The Lady Vikings JV Team win the "Double". With an 8-1-1 district record, they take the TAPPS 1-5A District Regular Season title and then storm through the 1st Annual TAPPS JV Championship.

With a 1-0 shutout win over TCA in the semifinal, they advance to play Ursuline in the tournament championship match. Junior, Erin Fisher scored the first goal while junior, Melissa Brodnicki added 2 of her own to defeat the Lady Bears in the championship 3-0.

This caps off a stellar season for the Nolan Catholic Women's JV Team outscoring district opponents 22-4. Congratulations to the Lady Vikes on an impressive season.
Posted by . at 3:24 PM No comments:
Email ThisBlogThis!Share to TwitterShare to FacebookShare to Pinterest

LVS Wins Final District Game; Head to Austin for First Round of Playoffs

The Lady Vikings scored in the 2nd minute to take a 1-0 lead on TCA on the road last Thursday night. Megan Billingsley scored her 7th goal of the season off an assist from Annie Smithey. Nolan continued to put pressure on the Lady Trojans and got a second goal with 7 minutes to play from Smithey off a cross. Smithey's 4th goal of her senior season turned out to be the game-winner as TCA converted on a penalty kick with about 5 to play in the game.

It is gridlock at the top of the table as 3 teams, including Nolan, are tied for 2nd place. With John Paul defeating Lynch on Friday and Liberty holding the tie-breaker over the Lady Vikings, Nolan will finish 4th in district.

The 4th place finish will mean that the Lady Vikings will travel to Austin on Friday to take on Austin St. Michael's who finished 3rd in District 2. That game will kick-off at 4pm.
Posted by . at 1:35 PM No comments:
Email ThisBlogThis!Share to TwitterShare to FacebookShare to Pinterest

Nolan Catholic will wrap-up district play against TCA on Thursday night and then host Marcus on Friday at 5:30pm. The seniors will be recognized at halftime on Friday. The men's varsity team will play after the women against Paschal High School.
Posted by . at 10:05 AM No comments:
Email ThisBlogThis!Share to TwitterShare to FacebookShare to Pinterest

The Nolan Catholic Women's Soccer Team will head to Austin on Saturday to take on Bourne Champion at 12:00pm and St. Stephen's at 6:00pm. The matches will be held at the St. Stephen's Episcopal School and will be part of a college combine event taking place on the weekend.
Posted by . at 11:56 AM No comments:
Email ThisBlogThis!Share to TwitterShare to FacebookShare to Pinterest 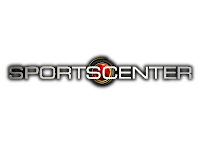 ESPN's SportsCenter will air highlights of the 2011 Nolan Showcase by JATO. The 9th Annual event was another success and as it gears up for its 10th Anniversary in 2012, ESPN will do a wrap-up of the event on Thursday, January 20th.

Thanks for all the participants and Good Luck the remainder of the season.
Posted by . at 11:51 PM No comments:
Email ThisBlogThis!Share to TwitterShare to FacebookShare to Pinterest 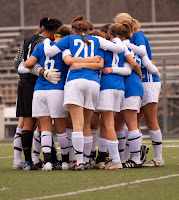 FORT WORTH, Texas - McKinney Boyd (McKinney, Texas) lost a player last month who is now a finalist for American Idol. Oddly, the play at the Nolan Showcase resembles another hit TV show – Wipeout.

Through two days at the prestigious high school girls’ soccer event in Texas, the POWERADE FAB 50 Nos. 1, 2 and 3 teams have taken losses. In addition, the No. 10 team lost Friday and the No. 11 squad is 0-2-1. Of course, many of the losses are to other FAB 50-ranked teams, yet the fall-out will result in a new-look Top 10 in next week’s national rankings.

SIMPLY PERFECT: It took one shot off the foot of St. Thomas Aquinas (Ft. Lauderdale, Fla.) senior Julie Schumacher to take down No. 1 McKinney Boyd, 1-0, on Friday afternoon at Nolan Catholic. The Navy-bound forward accepted a pass from Ana Cuffia about 30 yards from goal midway through the first half and launched a shot toward the far post, which clipped the post and ended up in the goal. The Raiders, ranked No. 16, made the first-half strike stand for their 17th straight shutout victory. Much of St. Thomas Aquinas’ success is tied to the exploits of Schumacher, who now has 26 goals this season. “I don’t score goals to tell you how many goals I have. I score goals to win games for my teammates,” Schumacher said. “I’ll take that goal (against Boyd) over any game where I score four goals, because this one won the game.”

Later Friday night, Aquinas ran its record to 18-0 with a dramatic 1-0 win over Nolan Catholic at Texas Christian University. Cuffia sprung Schumacher for a breakaway with less than two minutes remaining, and Schumacher calmly pushed a shot into the lower right corner. The score came just minutes after Nolan Catholic failed to convert a penalty kick.

“It was not our best game, but we got it done,” stated a relieved Carlos Giron, Aquinas’ longtime head coach.

Aquinas controlled most of the match, but a solid performance by Nolan keeper Paige Harris kept the match scoreless. Nolan Catholic was awarded a penalty kick with just under seven minutes remaining following a hard tackle in the box. Alex Rios, a Mexican youth national team player, took the penalty for the Vikings (8-7-2), and her shot hit the post and the ensuing cross was covered by Aquinas keeper Julia Kantor, who has been in net for all 18 Aquinas shutouts.

“As soon as it hit the post, I got back on my feet and took the cross,” Kantor said. “I got lucky.”

Aquinas faces San Clemente on Saturday morning with a chance to play itself into the national title chase.

HEARTBREAK HOST: Nolan Catholic coach Jay Fitzgerald summed up Friday’s 1-0 loss to Aquinas like this, “That’s Nolan soccer the past couple of decades. We’re good enough to get that one moment, that one situation. Eventually, one day, we’ll take advantage of that moment and that will make this program get over the hump. … We sagged and countered. We took away what they do best and made them work for a solution. In the end, that’s what they did – they found the solution and that’s why they are where they are [undefeated].”

In Fitzgerald’s 13 years as Nolan’s head coach, the team has been the private school state runner-up 11 times -- including the past 10 straight, losing all 11 final appearances to Ursuline Academy (Dallas, Texas). The last-minute loss to Aquinas was eerily similar to several state final defeats, prompting Fitzgerald to shake his head and say, “Heartbreaking."

LONG DAY: Players from San Clemente boarded a 7:30 a.m. flight in California, arrived in Texas at noon and played Southlake Carroll (Southlake, Texas) at 6 p.m. There was certainly no jet lag as San Clemente rolled to a 4-0 victory in a meeting of FAB 50 teams at TCU. Janae Cousineau scored the first and third goals, and both were backbreakers for Carroll. Cousineau’s first strike came 10 minutes into the match and two minutes later Alex Reisinger gave San Clemente a 2-0 lead. Cousineau’s scored her second goal, both assisted by Tessa Andujar, two minutes into the second half to thwart any hope of a Carroll rally.

“On the flight, we were really intimidated by this tournament because we had no idea what to expect,” said Cousineau, who has committed to Texas A&M. “After that first goal, we pushed hard because we knew we can do it. Once we get the first goal, we don’t let down.”

MAKING A STATEMENT: Plano West (Plano, Texas) was dealt a setback when goalkeeper Abby Smith opted against playing high school soccer due to youth national team commitments. Even without the star keeper, the No. 5 Wolves, with mostly sophomores in the starting lineup, are off to a 3-0 start following victories Friday over No. 10 Clear Lake (Houston, Texas) and Grapevine (Grapevine, Texas). Sam Wolf and Casie Ramsier scored in Plano West’s 2-1 win over Clear Lake. Taylor Jackson scored the lone goal in the team’s 1-0 victory over Grapevine. Plano West’s six goals in the tournament have come from five players – including twins Casie and Brooke Ramsier.

INJURED: Southlake Carroll senior and Notre Dame-bound Taylor Schneider sustained what coach Matt Colvin said was a high left ankle sprain in the first half of the team’s match with San Clemente. Colvin said it was unlikely Schneider will play in Saturday’s match against Klein Oak (Spring, Texas).

DAILY MVP: Schumacher was the MVP of Thursday’s action with two goals, and it’s hard not to give her the honors yet again Friday. The senior scored both goals as Aquinas knocked off No. 1 Boyd and Nolan Catholic, each by 1-0 margins.

AN IDOL? Holly Cavanagh was a member of the McKinney Boyd girls’ soccer team, but left the squad last week to pursue an a chance to make American Idol. Cavanagh, a singer, currently is in California, according to Boyd coach Jimmie Lankford.
Posted by . at 12:07 AM No comments:
Email ThisBlogThis!Share to TwitterShare to FacebookShare to Pinterest

Follow daily updates from the nations premier event at ESPNRISE. The Nolan College Showcase is where the best teams from coast to coast come to play. The nation's #1 team will be determined. CLICK HERE for more.
Posted by . at 8:41 AM No comments:
Email ThisBlogThis!Share to TwitterShare to FacebookShare to Pinterest

Nolan Catholic High School and Southlake Carroll play host to one of the nation’s most competitive tournament which once again includes only the best teams, not only in the area, but in the nation. Each year we increase the field of teams and this year is the biggest event yet—with 32 total teams from Texas, California, and Florida. Four teams in this years showcase have been ranked #1 in the nation in the last several years, while 11 of this years 32 Invitational teams have gained national respect already this year in the National Rankings: #1 McKinney Boyd, #2Coppell, #4 Ursuline, #5 San Clemente, #10 Plano West, #13 Clear Lake, #18 Seven Lakes, #31 Southlake Carroll, #35 Nolan Catholic, and #40 St. Thomas Aquinas. We always look forward to the level of play in each event.

The Lady Vikings welcome back former players, coaches, and fans as they kick off the 9th Annual LVS Alumni Game at 11:00am today. The Lady Vikings are also celebrating the programs 400th win since 1986 with a 2-1 victory over John Paul II last Tuesday night.

It should be an exciting day for the Lady Vikings Soccer Program.

Go VIKES!!
Posted by . at 10:24 AM No comments:
Email ThisBlogThis!Share to TwitterShare to FacebookShare to Pinterest

Spread the Wealth; Lady Vikes Down the Cardinals

The Lady Vikings come back from break with something to prove and they do it on the road, early.

Senior, Annie Smithey scores her first of the year in the first minute and it was just a matter of time before someone else stepped up to the table which wasn't until John Paul evened the match with 5 to play in the first half.

The Lady Vikings were resiliant throughout the match sticking to what works best for them and that is getting bodies forward. John Paul took 4 shots on goal compared to the 14 from the Lady Vikes and it was in the 68th minute when Junior, Allaire Langdon scored the first goal of her career of the 11th corner of the match. That goal turned out to be the game-winner and improved Nolan Catholic to 7-5-1 in district play.

With 1 more district match remaining next Tuesday against TCA, the Lady Vikings look forward to hosting the Nolan Showcase next weekend. The Nolan Showcase sees teams from all over the country. It has become one of the most competitive tournaments in the nation over the last 9 years of the event with teams being represented from coast to coast. For more information on the event CLICK HERE.
Posted by . at 12:12 PM No comments:
Email ThisBlogThis!Share to TwitterShare to FacebookShare to Pinterest
Newer Posts Older Posts Home
Subscribe to: Posts (Atom)