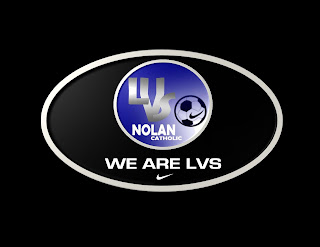 The LVS Season has officially begun. Players met after school today to discuss the upcoming season. Off-Season begins at the crack of dawn on Monday at 6:00am and continues through October 19th, which is when try-outs will be held. The first game is a district match vs Grapevine Faith on Tuesday, November 3rd. District matches continue through the month of November and December.
The 8th Annual Alumni Soccer Match kicks-off the New Year on Saturday, January 2nd at 11:00am at Doskocil Stadium.
The Red Bull Nolan Showcase featuring the nations top high school women's teams will take place on Jan. 7-9. The Nation's best teams will come to Fort Worth and Southlake from California, Florida, Louisiana, Arizona, Nevada, and of course, Texas. The field tripled in 2009 as Southlake Carroll co-hosted the event with Nolan Catholic. ESPN and NIKE have expressed interest in supporting the event. ESPNU has interest in televising a game or two.
The Lady Vikings will continue the following weekend at the Austin Showcase hosted by the St. Stephen's Soccer Academy and then come home to another week of non-district games until they compete once again in the CHHS Allison Horn Memorial Showcase.
A couple weeks until the playoffs begin as the Lady Vikings look for a long run at another State Championship.
Posted by . at 10:48 PM
Email ThisBlogThis!Share to TwitterShare to FacebookShare to Pinterest